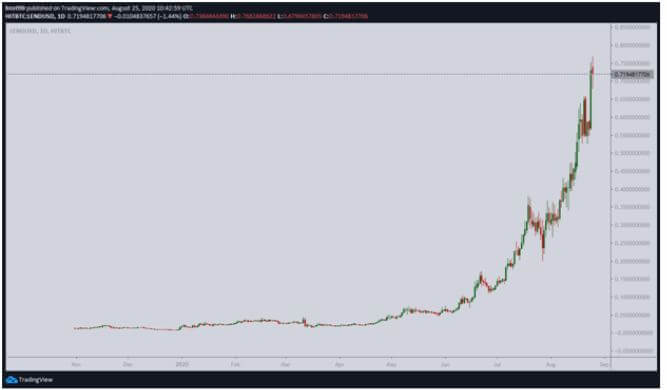 DeFi protocol Aave has over $1.45 billion in total value locked

With $1.45 billion price of total value locked, Aave has surpassed MakerDAO that has about $1.44 billion in TVL.

The total value locked in decentralized finance protocol Aave has hit $1.45 billion. According to knowledge from DeFi Pulse, Aave’sTVL is now up greater than 180% for the reason that begin of August.

Per the information, the protocol now has essentially the most crypto deposits in collateral, forward of MakerDAO that has about $1.44 billion price of property deposited in good contracts. Curve Finance accounts for over $1.10 billion, Compound $798 million and Yearn.finance $794 million.

The total value locked in all of the DeFi protocols is at the moment  about $6.91 billion on the time of scripting this. Aave’s dominance is about 20.9% in line with DeFi Pulse, with the value up greater than 3.8% in the previous 24 hours.

The DeFi area has had 4 totally different tasks hit the billion-dollar mark in total value locked over the previous few months.

Apart from MakerDAO and Aave, different Ethereum-based tasks to hit the milestone had been Compound and Curve Finance. The former additionally noticed its token COMP rally greater than 300% in days as curiosity in yield farming skyrocketed.

Aave formally launched its protocol in January 2020 after being in improvement since November 2017. Initially referred to as ETHLend, the P2P lending platform began with assist for 13 digital property for collateralized lending/borrowing.

Aavenomics is a token redistribution replace that may introduce AAVE tokens, which can permit holders to stake in addition to vote on governance points. Users may profit from credit score delegation, a function that enables them to earn when approved buyers take up loans with collateral offered by third-party property.

As nicely as in the quantities being locked in contracts, Aave has been on a tear in the market these days. Over the previous month, its governance token LEND has outperformed most different DeFi tokens.